After the drama of diagnosis passes and the preliminary offers of assistance dissipate, a few hardy souls hang in with cancer patients for the long haul. If we are lucky, they tender surprisingly creative acts and gifts.

Imaginative caregiving is welcome because of the debilitation of prolonged treatment but also because of the barrage of clichéd responses patients receive from chance acquaintances. There I am, minding my own business in the drugstore, when someone pops up: “My aunt had your kind of cancer and died in two months.” “You don’t look sick!” “Did you eat red meat?” “The good Lord never gives us more than we can bear.” Those of us with chronic disease learn to block out this type of noise.

In the process of sidelining inane comments, though, we may exacerbate the loneliness of the long-distance cancer patient, for dealing with the disease can be an isolating business. Colleagues in social situations can be tongue-tied about my condition, afraid of saying the wrong thing or respectful of my privacy. At a reception, I retreat into myself because of an unspeakable physical problem: a rash, a swelling, a hidden bag, enervating but boring fatigue, invisible neuropathies or joint pain. I feel further quarantined by an overwhelming consciousness of impending mortality that healthy men and women often cannot comprehend or desperately want to flee.

While conversations rarely penetrate the bell jar of my self-containment, inventive forms of caregiving do. Over the years, relatives and friends have scoured my refrigerator, weeded my closet, shaved my head, emailed jokes, brought over pets, read aloud a cherished book, served as my personal grocery shopper and taken me to concerts. Others have given me a gentle yoga session, a shell from Sanibel Island, a potboiler, an outrageous wig, a microwaveable hot pad, and (unexpectedly effective) battery-operated socks. 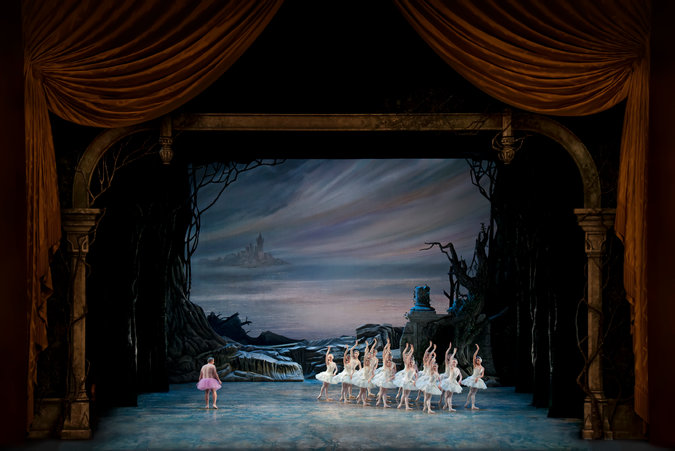 Mr. Carey with members of American Ballet Theater at Lincoln Center. The juxtaposition is playful, but the images simultaneously convey his isolation and vulnerability. CreditBob Carey

Wit is one of the most treasured characteristics of thoughtful caregiving, and Bob Carey’s Tutu Project offers a generous dose of it. After his wife, Linda, began dealing with a breast cancer diagnosis, Mr. Carey, a commercial photographer, began taking photographs of himself wearing only a pink tutu in public places. He wanted to make her laugh. Since the images also amused the other patients she met in the hospital, they decided to publish them as a coffee-table book called “Ballerina.”

Both photographer and subject, Mr. Carey poses in a variety of landmark settings: on the Brooklyn Bridge, at the Little Grand Canyon in Utah, on Newport Beach, Calif., at the Rock & Roll Hall of Fame in Cleveland. The pictures suggest that those dealing with cancer take it with them wherever they go. 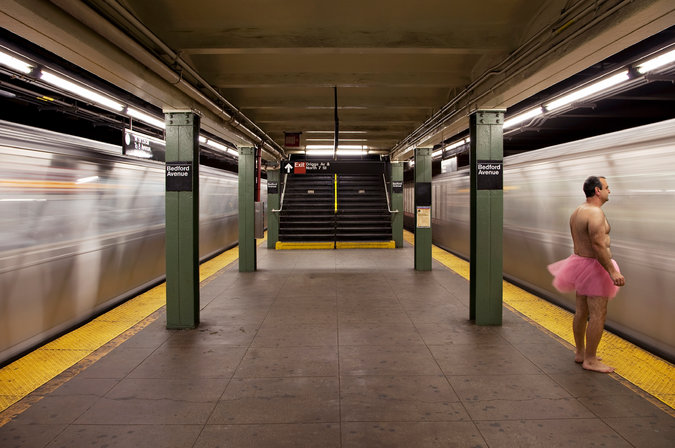 The juxtaposition of our idea of the stereotypically sleek ballerina and Mr. Carey’s burly, hairy body is playful, but the images simultaneously convey his isolation and vulnerability. Usually solo, he appears at a distance in vast spaces that dwarf him, decked out in a flimsy costume that exposes his fleshiness and that might put him at risk. The pink of breast cancer and the pink-washing of the marketing of breast cancer should not be considered gender-specific concerns limited to medical environments.

Caregivers often share the burdens of cancer. The finest poet of caregiving, Donald Hall, found himself blurting out not what he meant to say — “My wife has leukemia” — but a more fundamental truth: “My life has leukemia.” Bob and Linda Carey, shouldering her disease together, have used profits from his pictures to help women with the cost of breast cancer treatments, in the process proving that photography can become a form of caregiving.

So can writing. The geneticist J.B.S. Haldane composed the poem “Cancer’s a Funny Thing” to hearten future patients with the colorectal cancer that would kill him. A reader sent me to it possibly because of my having to deal with an ileostomy. In rhyming couplets, Professor Haldane describes his reaction to the surgery that issued in his colostomy: “So now I am like two-faced Janus / The only god who sees his anus.” (Maybe you have to share his condition to find his lines funny.)

Pediatric patients have inspired ingenious caregiving for decades. In children’s hospitals, wandering minstrels, magicians, super heroes and clowns turn out to be volunteers or therapists or doctors like Hunter “Patch” Adams, played by Robin Williams in a semi-biographical 1998 film. An admirer of Dr. Adams, the cabdriver Caterina Bellandi flamboyantly decorates herself and her car in Florence, Italy, where she provides “taxi therapy”: free trips to and from cancer facilities, during which children and their families are offered toys, bubbles and pizza.

Aiding adults in need of recurrent transport to the hospital, ChemoCars in Charlotte, N.C., was created to honor the memory of Gloria Bolster, a woman who died of pancreatic cancer. Her son, Zach Bolster, who founded the charity, said he finds satisfaction in his caregiving in part because people who are helped by the program call it using his mother’s phone number — as if she is helping others posthumously (which she is).

When I was most debilitated, the humblest forms of caring lifted my spirits: the clasp of a hand, a silence shared in tandem. It troubles me that before my diagnosis, I never thought of proffering these simple services to someone else.